​Hit the streets this week now that we have backpacks ready to hand out.

I went with photographer Kenny Karpov as he wanted to document what we do for the upcoming anniversary of Detroit SOUP!!  we are honored to have been awarded their first year and they are highlighting our project for their 5th year activities…thank you so much Amy Kaherl!

We hit a variety of locations as you never know who you will find and the weather was a bit iffy..tad rainy..and it was after rush hour but before lunch.

At 75 and mack we meet Mr Stanley, i had never meet him before..he was new to the area..had just got out of prison and was looking to get money to take a bus to Grand Rapids- said he mother died. 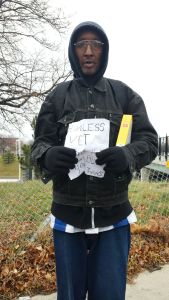 This is Mr Stanley.

Then we gave a backpack to Billy on the opposite kitty corner he said he was going directly to McDonalds across the street when i gave him the gift card. He and i know each other from previous winters..he is always very kind.

After that we went to the service drives near Greek Town. There we ran into four people on different corners…all of them having something in common.

First we met Josh, a fairly young guy i asked him how long he had been on the streets he told me about 8 months. I asked where he was from he told me downriver area..been seeing more and more folks from that area in the city. He asked if we would stop and see his wife.. well not his wife he told us but his girl. I told him we would.

She was our next stop. Her name was Stephanie and she is real tiny. I asked her her size and if she needed feminine products..mental note to put some supplies in my car.

Then we saw James he remembered from the Camera Project! Lastly in that area we ran into Gordy.. he remembered me as well from last year.

What they all have in common is they are all living in a small tent city. so i searched and found the location and talked to Mr. Charles..he goes by CJ. I told him and everyone else i would be by this Saturday to drop off some wool blankets I begged off someone and clothes for all of them.

the rest of the clothes will go to Ms Gerry at Spirit Hope Church for the Soup Kitchen Clothing Pantry.

This entry was posted in Community, Detroit, Homeless, On The Streets, Photography, Uncategorized. Bookmark the permalink.